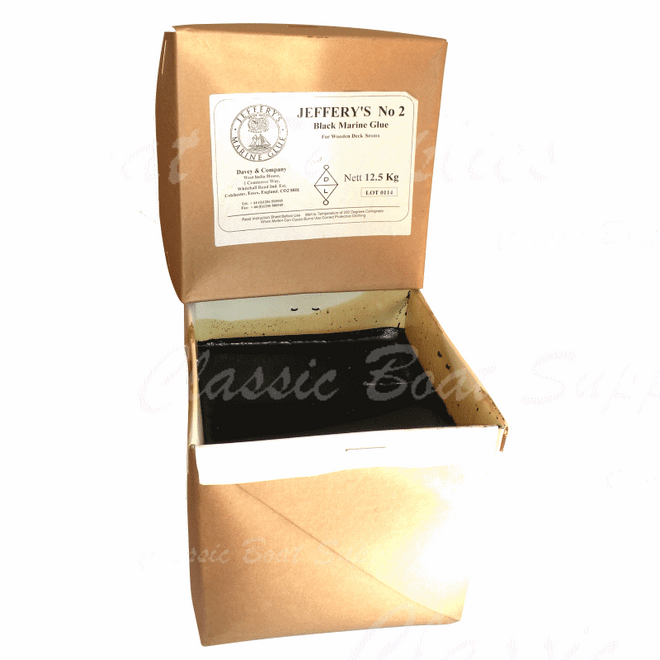 Jeffery's Marine Glue is a traditional product now owned by Davey & Company.  This product has been the premier choice for traditional deck seaming around the world for decades.

Still produced in England from the original formula, it is as reliable today as throughout the last century.  It will adhere tenaciously to the seam for many years, remaining flexible in low temperatures and withstanding softening at high temperatures.

To apply, once carefully heated to a working temperature of around 370°F (190°C) it can be poured onto the prepared seams.  Two applications are needed to ensure that all steam and air is released.

Note that Jeffery’s No2 Black Marine Glue is not a Tropics version of the glue, however it used worldwide.  In the tropics thought has to be given to regularly dousing the deck with water.

Break the glue into small pieces and put in a clean pot to three-quarters full.  Place over heat source.

Melt glue slowly, giving an occasional stirring until it flows freely.  This will be at about 200°C

Care must be taken during the melting process as prolonged overheating will damage certain qualities of the glue.

The caulking must be hammered well down into the seams.  Caulking and seams must be free from dust, grease, etc., which may prevent adhesion.

Due to the movement of timber, and as confirmed by practical experience, we would suggest the following minimum seam dimensions to give a trouble-free waterproof deck.

Two applications of glue should be made - the first coming level with the top of the seam. The first application will release a mass of steam bubbles and air into the seam.  These will rise to the surface of the glue, but some will not be released due to the chilling of the surface.

The second application will then reheat the top of the glue, allowing the bubbles to float out into the bead, which will later be scraped off and discarded.

Marine-grade silicon by 3M™. Available in clear or white, this silicon can be purchased in tubes or cartridges. * Can be used on painted metal, fibreglass, glass, non-oily woods and many types...

Premium Marine Polish is simply the best polish you can buy. The special polymers provide unmatched protection against UV rays, seal the surface to repel stains and deliver a deep, long-lasting gloss...

A traditional preservative for natural hemp ropes and timber, Stockholm Tar (or Pine Tar) has long been used for numerous sealing applications on boats. In Skandinavia, Stockholm Tar continues...

Oakum is natural hemp that has been impregnated with Stockholm Tar (also known as pine tar as it is extracted from the sap of pine trees).  Oakum is used for the packing (or caulking) between...

Traditionally hand-forged carbon steel caulking irons from England.  These caulking irons are light and comfortable to hold for long periods.   This particular iron has a straight sharp...

Traditionally hand-forged carbon steel caulking irons from England.  These caulking irons are light and comfortable to hold for long periods.  They have a single crease in the tip with a...

Lanoguard is an all-purpose anti-corrosive, lubricant and water proofing agent that delivers superb results in a wide variety of applications. It can be used on metals, leather, plastics...

Traditionally hand-forged carbon steel caulking irons from England.  These caulking irons are light and comfortable to hold for long periods.   This particular iron has a sharp blade (no...

Quality caulking mallet from Davey & Co.  With a hardwood head, this caluking hammer is the ideal mallet for use with our range of caulking irons (hand made in Denmark). The head length is...

* Used exclusively for caulking of joints in traditional timber decking in boats and yachts.* Resistant to UV light and weathering.* Can be sanded.* Non-corrosive and easy to apply.* Solas approved...

* Seals joints between dissimilar metals of all types including magnesium and its alloys.* Protects metals in contact with wood, synthetic resin compositions, leather, rubber, fabrics etc.