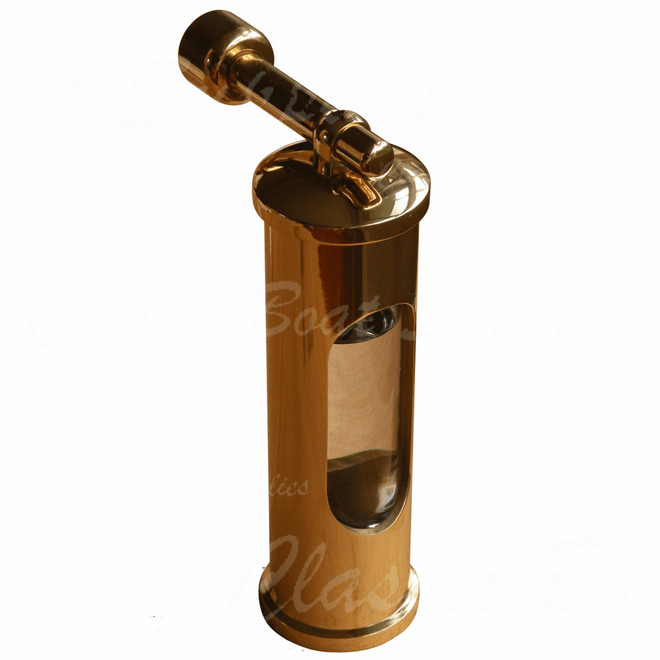 The Stormglass was, is so far as we know, first used in about 1750 by sailing ships to predict stormy weather.

The first proper report concerning its use on board a ship stems from the Darwin Expedition in 1831-1836. On December 27th 1831, Charles Darwin set off in the three-masted "HMS Beagle" under the command of Captain Fitzroy (1805-1865), who throughout his career at sea and on land used the Stormglass. Fitzroy later became Admiral of the Fleet and was a meteoroloigist who later became director of the British Meteorological Office. He wrote the famous "Weather Book" popularising the art of forecasting the weather and communicating it to all strata of the population. At the height of his career - and true to a family tradition - he slit his own throat.

The Stormglass is a reliable barometer. Everybody who has one will consult it daily to see what the weather is going to do in the next 24 hours or so. Others use the Stormglass to predict when the fish are biting! Whatever its use, there is no doubt that the Stormglass works. However, to date, nobody has been able to provide a scientific explanation as to exactly why. Admiral Fitzroy believed that it was down to static electricity in the fields around us. A revloutionary thought at the time!

For optimum use, place the Stormglass in a cool place - for example in a south-facing window or on a boat. As the name suggests, the Stormglass is best at predicting stormy weather within the next 24 to 48-hour period. The Stormglass does not completely replace the barometer - but it is a good supplement. Always remember to check the weather forecast!

The Stormglass is a highly-valued object for everyday useand is a popular gift; an example of genuine Danish craftmanship. Keep the Stormglass away from strong heat and direct sunlight as it may then cease to function.

Manufactured in Denmark by Delite (incorporating E S Sorensen) and standing 140mm tall, this Stormglass is supplied complete with mount.

Available in three finishes as detailed below.

Warning: In case of contact with the active liquid, immediately wash with plenty of water. 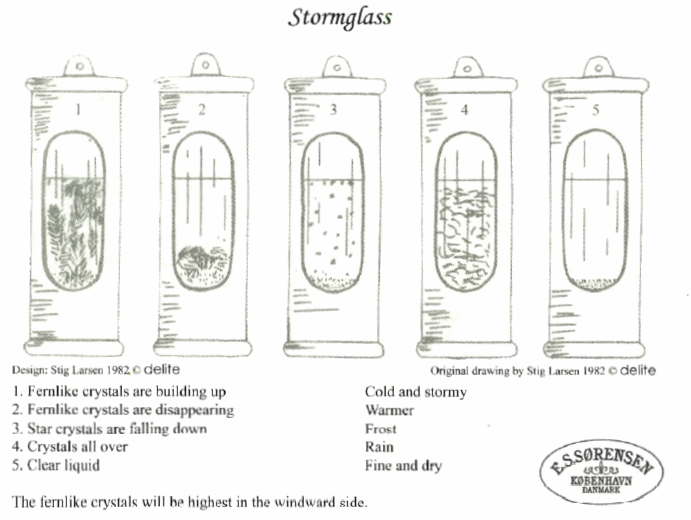 A novel way to check the temperature at a glance. Tags hanging from the balls show the relevant temperature. Manufactured in Denmark by Delite (incorporating E S Sorensen) and standing...

Brass ship's barometers indcate the barometric pressure, and can be a good indicator of impending weather changes. Suitable for use at home or onboard vessels, these brass barometers feature a solid...

A slimline solid fuel cabin heater designed for boats up to around 30 feet (10 metres). Solidly made in the UK from cast iron and finished black with eitherpolished brass or chrome plated...

Brass ship's clock suitable for use at home or onboard vessels, these brass clocks feature a solid brass case and a precision movement from Japan. The clock face is marked with 12-hour and 24-hour...

Hand-made bronze letters and numerals available in a range of sizes. Cast in Australia, they can be finished in either polished bronze or chrome-plated bronze. Please order separately suitable...

New from Davey & Co, this vibrating electric marine horn is of all-brass construction with a spun body and trumpet complemented with brass fastenings and bracket. This horn uses a similar...

Traditionally-styled solid brass bilge pumps in two sizes. The smaller pump has a capacity of nine litres/minute, and the larger 40 litres/minute. These high-quality bilge pumps are supplied complete...

An attractive engine control lever available in polished brass or chrome plated finishes. The simple twist-locking action allows friction to be adjusted and ensures the lever will stay in position...